But after the Taliban took over the Afghan capital in August, Wardak and her female colleagues were told their services were not required. When the women — who had tried to return to work in a group a few days after the takeover — demanded to know why, the young Taliban blocking their entry to the courthouse scoffed.

“They told us clearly that you cannot work as judges any more,” Wardak said. “Some were impolite towards us. Some told us, ‘go home — women are meant for home’. I cried a lot. I was earning a good salary. We had everything in our life. Now, everything is destroyed.”

Across Afghanistan, women’s lives are being severely circumscribed as the Taliban moves to reimpose the segregation that marked their previous rule in the 1990s.

Strictures vary from region to region depending on the sentiments of local commanders and communities. But except for healthcare workers, primary schoolteachers and women who do jobs that men are not permitted to do, such as frisking female passengers at airports, nearly all female public-sector employees have been dismissed or ordered to stay at home indefinitely.

While girls can attend primary school, most girls’ secondary schools are still closed a month after older boys went back to class. Female students at public universities are uncertain whether they will be permitted to resume their studies.

The policies fall far short of what many hoped for when the Taliban promised soon after its takeover that women’s rights would be protected “within the framework of Islamic law”.

“Taliban 2.0 is no different than Taliban 1.0 — the only difference is that they are more media savvy,” said Bahar Jalali, who founded the gender studies department at the private American University of Afghanistan in Kabul.

But if the Taliban’s attitude has changed little in 20 years, many Afghan women — particularly the urban and educated — appear unwilling to accept the constraints.

In recent weeks, small groups of women in Kabul, Herat and other cities have held demonstrations under the eyes of armed Taliban, demanding that their rights be restored and girls’ schools reopened.

“Today’s women are not like women the first time the Taliban took over Afghanistan,” said Qudsia, a 29-year-old lawyer and former government prosecutor who has joined several of the protests. “We are going against people who only know the language of arms and nothing else. It is a huge risk, but we have no choice.”

Taliban fighters have responded to such protests with force, using tear gas, firing warning shots into the air and beating women and journalists covering the demonstrations. But the protesters said they will continue their campaign.

“When we have lost everything, there is nothing left for us to lose,” said Qudsia. “They are treating us as though we are not human. They just want us to be like prisoners.”

When the Taliban ruled Afghanistan in the 1990s, women were under de facto house arrest — barred from schools and universities, prohibited from working and allowed to leave home only if escorted by male relatives. Those accused of adultery were stoned to death, and other infractions — including violation of the requirement to wear the all-encompassing burka in public — incurred violent punishments.

In the two decades after the 2001 US-led invasion drove out the Taliban, Afghan women made strides in education, employment and public life. Prior to the US withdrawal in August, Zalmay Khalilzad, the erstwhile US special representative for Afghanistan, argued that Taliban leaders had also changed and now understood the importance of respecting women’s rights.

Since their seizure of Kabul, Taliban leaders have tried to strike a more moderate tone as they seek international recognition and access to the country’s estimated $9bn in frozen foreign currency reserves.

Zabihullah Mujahid, the Taliban’s main spokesman, declared soon after the victory that women would not require a male chaperone to conduct routine daily business or for journeys shorter than three days. No nationwide dress code for women has been imposed and they have not been barred from private sector jobs.

In practice, heavily armed Taliban fighters supervised by local commanders are enforcing their own ideas of appropriate behaviour for women — leading to regional differences in how they are treated. 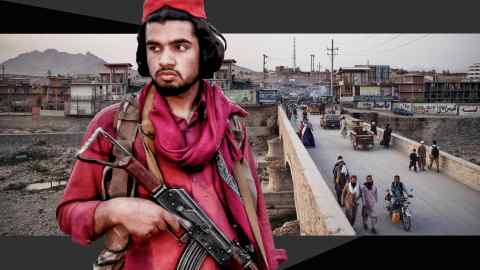 “These Taliban foot soldiers have been completely segregated from women,” Jalali said. “They have been taught and trained that women should never be seen in the public sphere, that they should be locked up inside the home and all their movements controlled.”

The government has closed the ministry of women’s affairs, which focused on female empowerment, and replaced it with one for the “promotion of virtue and prevention of vice”, a kind of religious police.

“The Taliban have changed but not very much — Afghanistan has changed much more than they have,” said Heather Barr, associate director of the women’s rights division at Human Rights Watch. “If you go outside without [a male chaperone] in Herat, there is a significant likelihood that you are going to be harassed in a frightening way.”

Barr said the Taliban’s concessions on women’s rights fell far short of international expectations. Their refusal to let girls return to secondary school and other curbs were among the reasons no country had yet recognised the Taliban as Afghanistan’s legitimate government, she said.

The new regime has disrupted life for men as well as women. But female workers face a more precarious future as the economy deteriorates without the foreign aid that previously kept it afloat.

Humaira worked at the Kabul Police Academy for 14 years, rising to the rank of first lieutenant. The academy has now been closed, leaving all the officers jobless. “The Taliban told them to get lost — your kingdom is ended,” she said. She is considering joining the exodus of women who feel they have no future in Afghanistan.

“I am talking with my mother and friends about whether to stay here or leave,” she said. “For now, I have no choice but to clean houses — because I need a piece of bread.”

Only in Australia: Video shows a wasp battling a huntsman spider

André Leon Talley dead at 73: Former Vogue editor and fashion icon passes away at a hospital
42 mins ago