Eating lots of nuts, seeds and plant oils may cut your risk of being sent to an early grave, scientists say.

Iranian researchers reviewed dozens of studies that delved into diets and mortality rates, spanning up to three decades.

They specifically looked at the effects of alpha-linolenic acid (ALA) — an omega-3 found in plants such as soy beans and flaxseeds.

Results showed people with a high intake of the nutrient — around 1.6g a day — were 10 per cent less likely to die from any cause, compared to those who consumed the lowest amounts — around 0.7g.

Deaths from heart disease were also lower among people who ate a diet rich in nuts and other ALA-abundant foods.

For every 1g increase in ALA per day – around one tablespoon of canola oil – the risk of dying from cardiovascular disease fell by five per cent, the study claimed.

However, the review also showed consuming high amounts of ALA was linked to an increased risk of dying from cancer.

The study, published in the British Medical Journal, states further trials are needed to confirm the link.

Alpha-linolenic acid – an omega-3 found in plants such as soy beans, nuts and flaxseeds – was found to slash the risk of overall death, as well as the risk of dying from heart and blood vessel disease 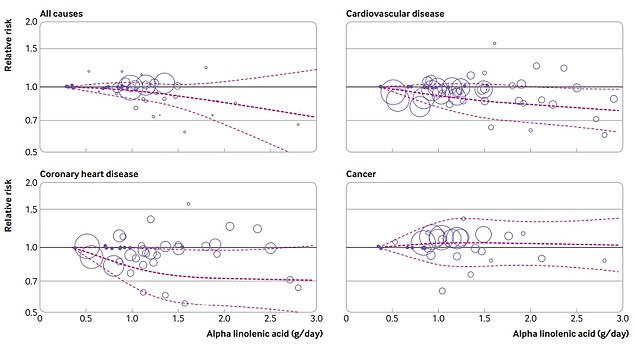 The graphs show how alpha-linolenic acid (ALA) – an omega-3 found in plants such as soy beans, nuts and flax seeds – intake affects the risk of death from all causes (top left), cardiovascular disease (top right), coronary heart disease (bottom left) and cancer (bottom right). A high intake of ALA was linked with a 10 per cent drop in risk of death, 11 per cent decline in the chance of dying from coronary heart disease and an eight per cent drop  in the risk of dying from cardiovascular disease. However, the findings suggest the seeds could be linked with a slight uptick in risk from cancer, but cautioned more studies would be needed to confirm this

Earlier studies found ALA was linked with a lower risk of fatal coronary heart disease — one type of cardiovascular disease.

But a raft of others were inconclusive on whether the nutrient improved mortality.

To address the uncertainty, the Tehran University of Medical Sciences team analysed results from 41 studies published between 1991 and 2021.

In total, the studies included 1.2million adults – mostly from western countries – who were monitored for between two and 32 years.

The review found adults who ate lots of ALA-rich foods were 10 per cent less likely to die from all causes – equivalent to 113 fewer deaths per 10,000 person-years.

And it reduced the chance of dying from cardiovascular disease by eight per cent – which would lead to around 33 fewer deaths per 10,000 person-years.

Sina Naghshi and colleagues also spotted the more ALA a person consumed, the less likely they were to die from cardiovascular disease.

The review was observational, so cannot conclude that ALA consumption definitely fuelled the improvements or cancer risk.

But researchers believe their findings are ‘robust’, and bragged that they add to the ‘evidence of the potential health benefits of polyunsaturated fatty acids’.

They said further studies should examine the link between ALA and other causes of death to determine if it can be linked with reducing the risk of dying from any other causes.

Experts should also look into specific ALA-rich foods to see if how the omega-3 is consumed affects mortality rates.

They warned any recommendations to eat more ALA should be made ‘cautiously’ due to their finding of a possible link with cancer.

Meals should be based on potatoes, bread, rice, pasta or other starchy carbohydrates, ideally wholegrain, according to the NHS

• Base meals on potatoes, bread, rice, pasta or other starchy carbohydrates, ideally wholegrain

• 30 grams of fibre a day: This is the same as eating all of the following: 5 portions of fruit and vegetables, 2 whole-wheat cereal biscuits, 2 thick slices of wholemeal bread and large baked potato with the skin on

• Eat some beans, pulses, fish, eggs, meat and other proteins (including 2 portions of fish every week, one of which should be oily)

• Choose unsaturated oils and spreads and consuming in small amounts

How did Florida end up with one of the best COVID-19 case and death rates in the US?

The Most Overrated Features In Modern Cars
28 mins ago