When it comes to getting from A to B on foot, it turns out we’re wired not to take the shortest route but rather the ‘pointiest path’.

The reason for this, researchers say, is because human brains are not optimised to navigate cities.

Instead, pedestrians appear to choose paths that seem to point most directly toward their destination, even if those routes end up being longer.

Researchers at MIT, who based their study on a dataset of more than 14,000 people going about their daily lives, called this the ‘pointiest path’.

An MIT study suggests our brains are not optimized to calculate the shortest possible route when navigating on foot. In this figure, pedestrian paths are shown in red while the shortest path is in blue

WHAT IS VECTOR-BASED NAVIGATION?

Vector-based navigation does not produce the shortest path but it gets quite close to it.

What’s also key is that it does not require much less brainpower.

Experts believe humans and other animals may have evolved to use it so they can focus on other things at the same time, such as ‘a lion or a perilous SUV’.

It involves choosing paths that seem to point most directly to a person’s destination, even if those routes end up being longer.

MIT researchers, who studied the kind of navigation humans use, called this the ‘pointiest path’.

This type of navigation is very different from the computer algorithms used by a smartphone or GPS device, which can calculate the shortest route between any two points based on the maps stored in their memory.

This strategy, known as vector-based navigation, has also been seen in studies of animals ranging from primates to insects.

The MIT experts believe vector-based navigation, which requires less brainpower than actually calculating the shortest route, may have evolved to let the brain devote more power to other tasks.

‘There appears to be a trade-off that allows computational power in our brain to be used for other things — 30,000 years ago, to avoid a lion, or now, to avoid a perilous SUV,’ said Carlo Ratti, a professor of urban technologies at MIT.

Twenty years ago, while a graduate student at Cambridge University, Ratti walked the route between his residential college and his departmental office nearly every day.

‘Surely one route was more efficient than the other, but I had drifted into adapting two, one for each direction,’ Ratti said.

‘I was consistently inconsistent, a small but frustrating realisation for a student devoting his life to rational thinking.’

One of Ratti’s research interests is using large datasets from mobile devices to study how people behave in urban environments, which is what led him to this latest work.

His lab acquired a dataset several years ago of anonymised GPS signals from mobile phones of pedestrians as they walked through Boston and Cambridge in Massachusetts over 12 months.

Ratti thought the data, which included more than 550,000 paths taken by more than 14,000 people, could help to answer the question of how people choose their routes when navigating a city on foot.

His team’s analysis showed that instead of choosing the shortest routes, pedestrians selected routes that were slightly longer but minimised their angular deviation from the destination. 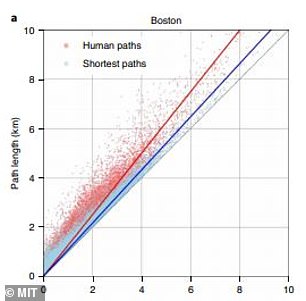 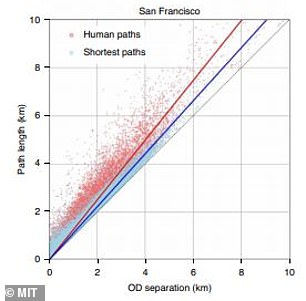 The findings were the same for both pedestrians in Boston or Cambridge, which have a convoluted network of streets, and in San Francisco, which has a grid-style street layout

To put it another way, they chose paths that allowed them to more directly face their endpoint as they started the route, even if a path that began by heading more to the left or right might actually end up being shorter.

‘Instead of calculating minimal distances, we found that the most predictive model was not one that found the shortest path, but instead one that tried to minimise angular displacement — pointing directly toward the destination as much as possible, even if traveling at larger angles would actually be more efficient,’ said Paolo Santi, a co-author and principal research scientist at the Italian National Research Council.

‘We have proposed to call this the pointiest path.’

The findings were the same for both pedestrians in Boston or Cambridge, which have a convoluted network of streets, and in San Francisco, which has a grid-style street layout.

In both cities, the researchers also observed that people tended to choose different routes when making a round trip between two destinations, just as Ratti did at his graduate school. 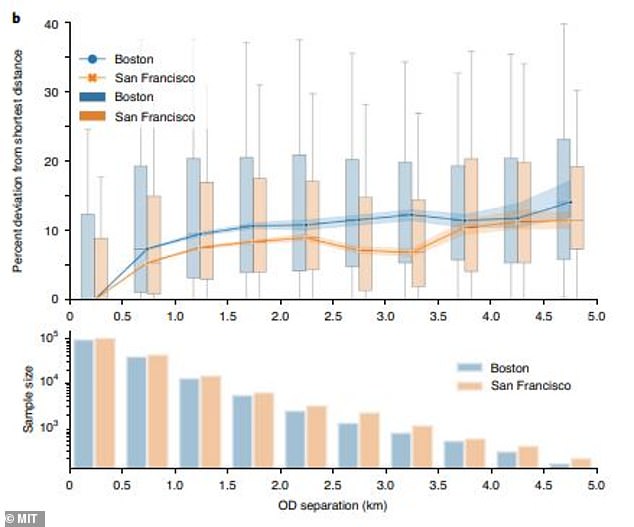 ‘When we make decisions based on angle to destination, the street network will lead you to an asymmetrical path,’ he said.

‘Based on thousands of walkers, it is very clear that I am not the only one: Human beings are not optimal navigators.’

Studies of animal behavior and brain activity, particularly in the hippocampus, have also suggested that the brain’s navigation strategies are based on calculating vectors.

This type of navigation is very different from the computer algorithms used by a smartphone or GPS device, which can calculate the shortest route between any two points based on the maps stored in their memory.

Without access to those kinds of maps, the animal brain has had to come up with alternative strategies to navigate between locations, according to Joshua Tenenbaum, another of the study’s co-authors.

‘You can’t have a detailed, distance-based map downloaded into the brain, so how else are you going to do it? The more natural thing might be use information that’s more available to us from our experience.

‘Thinking in terms of points of reference, landmarks, and angles is a very natural way to build algorithms for mapping and navigating space based on what you learn from your own experience moving around in the world.’

Ratti added: ‘As smartphone and portable electronics increasingly couple human and artificial intelligence, it is becoming increasingly important to better understand the computational mechanisms used by our brain and how they relate to those used by machines.’

The research has been published in the journal Nature Computational Science.

WHICH NAVIGATION APP IS THE MOST EFFICIENT?

He measured his activity on Google Maps, Apple Maps and Waze to determine which navigation service got their users to their destination quickest.

For each trip, he randomly selected an app to use and recorded this data in each trip: 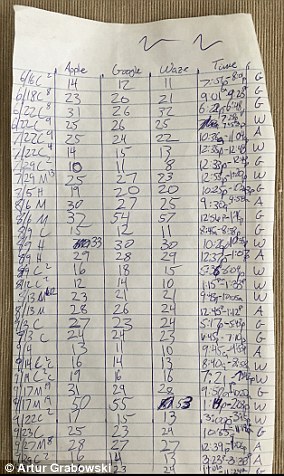 Grabowski collected a data set (pictured) based on 120 trips taken via Apple Maps, Waze and Google Maps since early 2017

From that data, he charted how often each app provided slower/faster trip time.

This figure determined his key question: Which navigation app actually gets you to your destination most quickly?

Based on his results, he determined that Google Maps gets users to their destination fastest .

New coat? Here are the deals to expect from The North Face this Black Friday 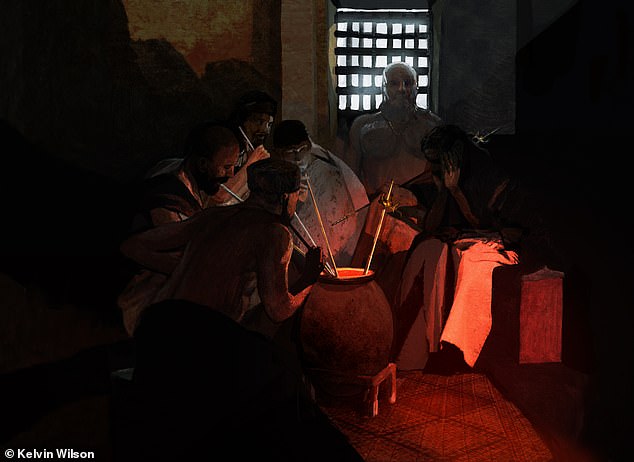 Archaeology: Oldest-known drinking straws were gold and silver, 3ft long and used in a communal bowl 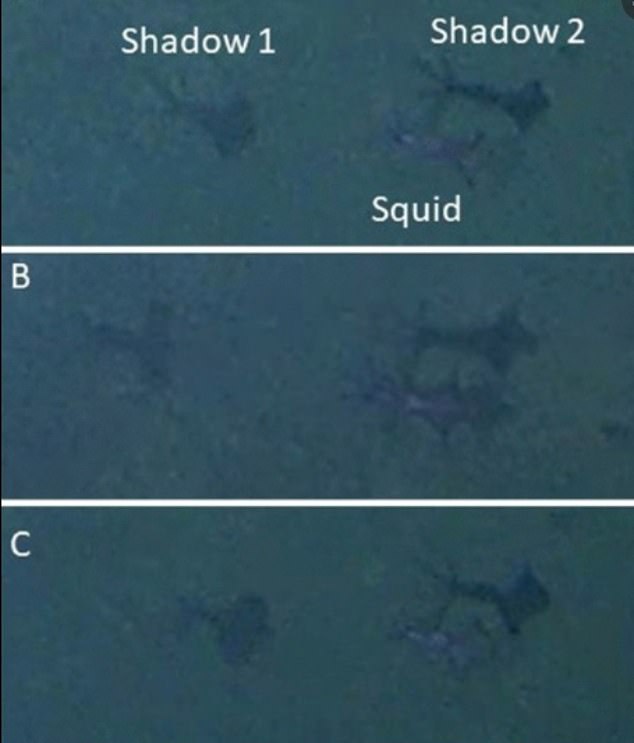