By Nathan Salt For Mailonline


Chelsea centre back Andreas Christensen has become the latest player in the Blues to test positive for Covid, ruling him out of Saturday’s clash with title challengers Man City.

Boss Thomas Tuchel is already without long-term absentees Ben Chilwell and Reece James in defence, with centre back Trevoh Chalobah also out.

As he addressed the media on Friday lunchtime he confirmed Denmark international Christensen has now been sidelined with a positive test as he enters a period of isolation. 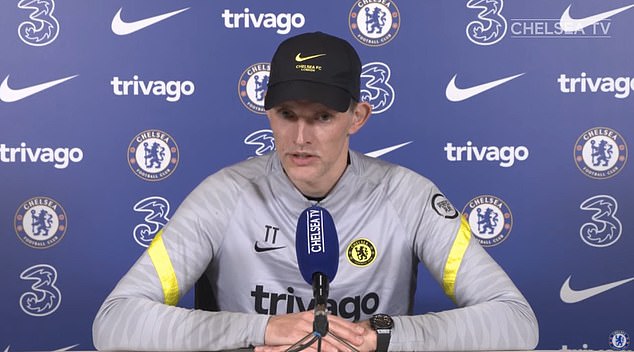 The Blues have recalled Kenedy from his Flamengo loan spell in order to combat their wing-back injury crisis – although Tuchel said one player is ‘not the answer’.

The Blues are left with backline problems after Chilwell was ruled out for the season after undergoing knee surgery and James has been sidelined for two months with a hamstring tear.

The injuries have left Tuchel with just one recognised wing-back in Marcos Alonso and the Chelsea boss has decided to bring Kenedy back to Stamford Bridge.

‘Kenedy is back and I am very happy about it,’ Tuchel said.

‘It is a huge opportunity for him to make his mark at this club and team. I will not talk as if Kenedy is THE solution but he is a solution.’

Chelsea go into the game sat second in the Premier League, 10 points behind runaway leaders City.

Asked if defeat at the Etihad Stadium would put City out of sight in the title race, Tuchel accepted it is a possibility.

The German coach added: ‘Maybe, who knows. They have dealt better with injuries and the Covid situation.

‘Maybe it’s luck or they do it better. They have had less injuries and less weeks they missed them. They did not suffer from Covid as we did over many weeks, this is the huge difference.’