Naomi Campbell introduced her daughter to the world in a new British Vogue cover story yesterday, sparking fresh interest in the supermodel’s journey to motherhood.

The 51-year-old confirmed for the first time that her nine-month-old daughter, whose name was not been revealed, was not adopted, adding: ‘She’s my child.’

The comment has renewed interest in how the baby was conceived, carried and delivered.

There is widespread speculation that Naomi used a surrogate, an approach growing in popularity, due to the fact that she was not spotted with a baby bump in the months leading up to the baby’s birth.

APRIL 2021: Naomi Campbell walking the Michael Kors runway in New York, five-and-a-half weeks before she announced the arrival of her daughter. One parenting expert said it is possible Naomi was pregnant at the time this photo was taken, with the fabric tricking the eye 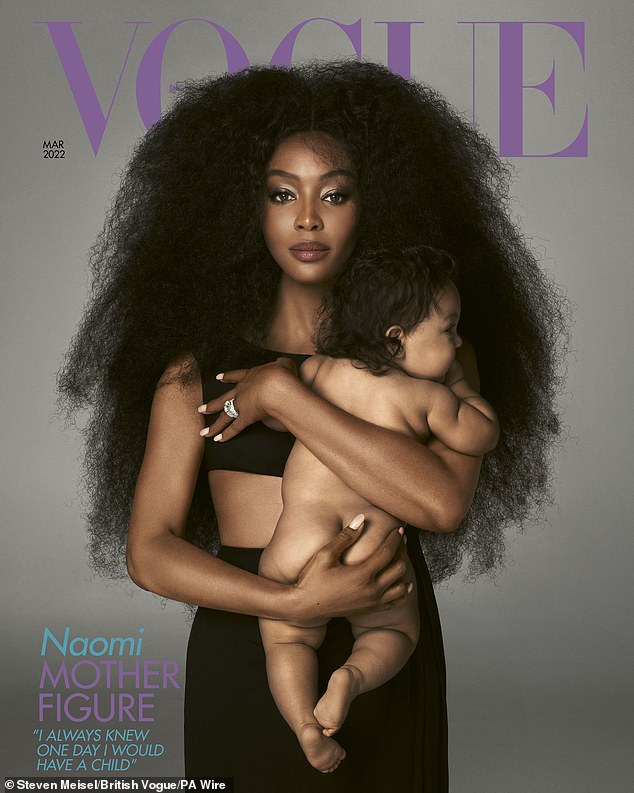 Naomi Campbell introduced her daughter to the world in a new British Vogue cover story, sparking fresh speculation about the supermodel’s journey to motherhood

If this was the case, she could have used her own eggs and donor sperm to create an embryo to be implanted via IVF.

However there is also the possibility that Naomi secretly carried the baby herself and concealed a petite baby bump in flowing clothes or fabric that tricked the eye.

If she did carry the baby herself, it is likely she did so with the help of some sort of fertility treatment, such as using previously frozen eggs for IVF.

Here, FEMAIL speaks to British experts who discuss the routes to motherhood Naomi might have taken…

DID NAOMI HIDE A BABY BUMP? 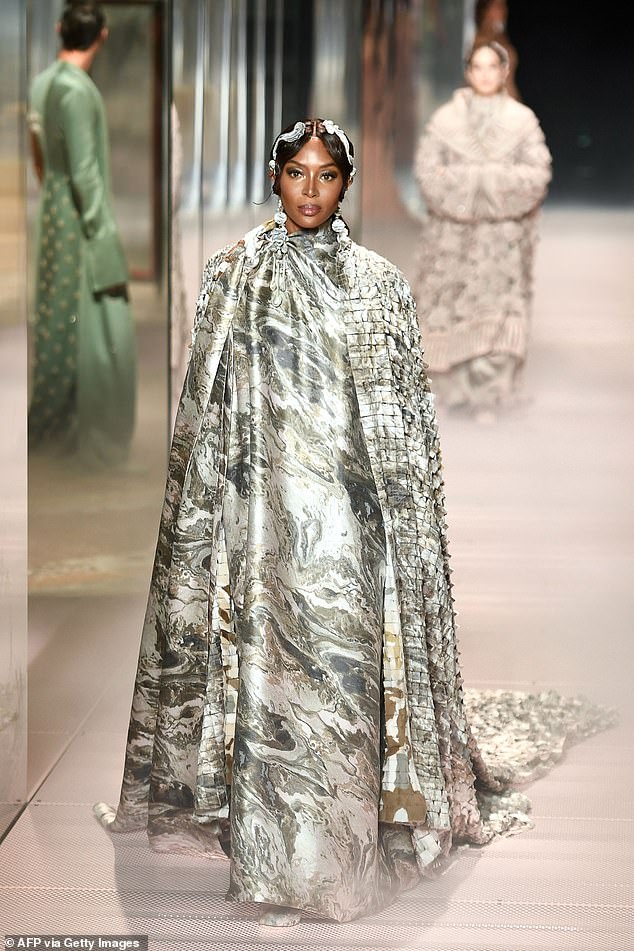 JANUARY 2021: Naomi Campbell at Fendi’s Spring/Summer show at Paris Fashion Week. One expert believes her flowing silver dress could have been hiding a baby bump

The model appeared on at least two catwalks in the four months before her baby’s arrival: Fendi’s Spring/Summer show at Paris Fashion Week in February and Michael Kors at New York Fashion week on April 8, five-and-a-half weeks before the birth.

For the first show, Naomi was dressed in a flowing silver cape dress with a wide A-line shape that completely covered her body.

In the second she wore a black sequin evening gown with a long black coat.

The 5ft 10in supermodel looked as slender and statuesque, but one expert believes she could have been pregnant at the time.

‘It looks to me as if she really could have been pregnant,’ explains baby and parenting author and expert Rachel Fitzd.

‘Some women barely show at all until the later stages of pregnancy, especially if they are tall, and the way a baby is lying and the clothes we choose to wear can have a big impact on how pregnant we look.’ 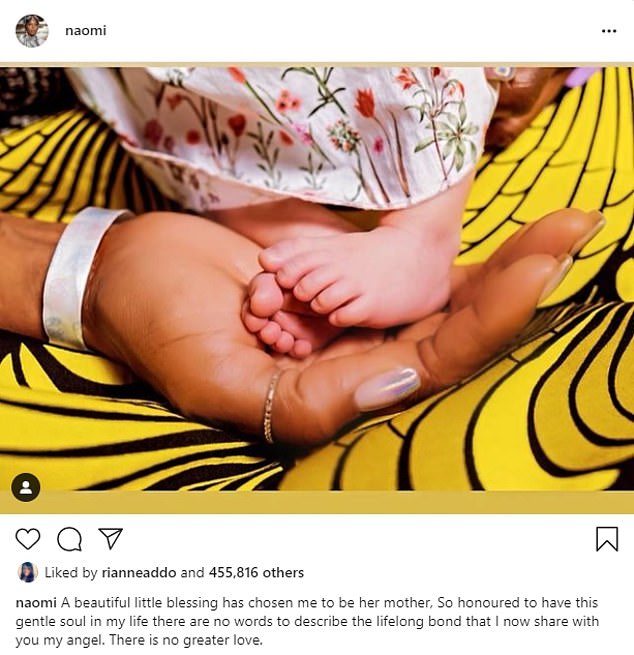 MAY 2021: Naomi announced she is a mother in May, four years after crediting science with giving her the opportunity to start a family ‘whenever she wants’

Statistically, the least likely option for a woman of Naomi’s age is natural conception.

Based on the date of her baby’s birth, she would have fallen pregnant at 50, which, while not impossible, is highly unusual.

This is because after the age of 30, the rate of decline in both quality and quantity of eggs rapidly speeds up.

In a woman’s 20s, there’s a one in three chance of fertilisation per cycle, compared with a one in five chance in their 30s.

Between the ages of roughly 40 and 55, there is the added issue of the menopause, during which a woman stops having periods. In the UK, the average age for a woman to reach the menopause is 51.

This means it is very unlikely for a woman in her 50s, like Naomi, to conceive without any scientific intervention. 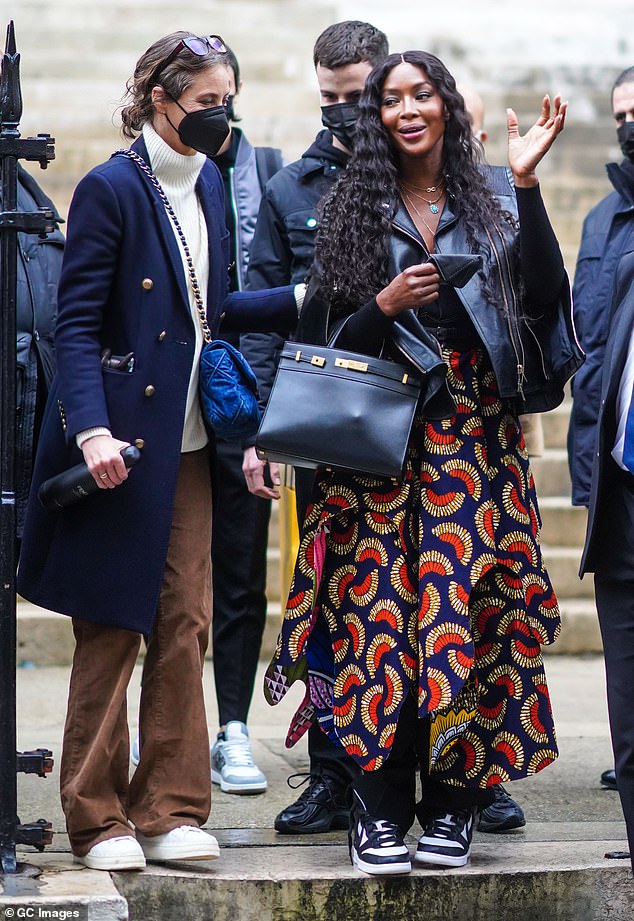 JANUARY 2021: Naomi with supermodel BFF Christy Turlington outside a Paris Fashion Week show. Her daughter was born in May that year

It is equally likely that a 50-year-old woman can fall pregnant using IVF using her own eggs.

Rachel explains: ‘It is possible to have NHS fertility treatment using donor sperm where appropriate which is great news for couples. In the UK it is not permitted to pay a donor except for expenses for clinic visits.

It is also possible to have private treatment using donor sperm.

When done at a clinic, the donated sperm is cleaned and filtered to make sure only the very healthiest sample is used.

Donor sperm is kept frozen until needed and then can be used for either IVF (where fertilisation takes place outside the body – test tube baby), or the defrosted sperm is put directly into a woman’s womb using a speculum such as is used for smear tests.

A thin tube called a catheter is passed through the cervix (neck of the womb) and the sperm squirted in.

Chances of success, as with all fertility treatments is variable according to the woman’s age and health but chances of success can be increased with the use of fertility medications to stimulate ovulation and then to protect the pregnancy from miscarriage.

‘In truth, although the success rates for IVF and other forms of assisted fertility have improved over the decades, the success rates are still not as good as some might think,’ explains Rachel, who is a speaker at The Baby Show at London Excel next month.

‘The younger the woman undergoing treatment the higher the likelihood of success.

‘Once women reach 43 and over then success drops off markedly and is at about 5 per cent.’

Celebrities have been criticised for giving ‘ordinary’ women false hope about the success of IVF treatment for older mothers.

‘Celebrity pregnancies at advanced ages give women false hope about what is actually possible,’ Professor Joyce Harper, reproductive scientist and author of the book Your Fertile Years: What You Need to Know to Make Informed Choices, told the Guardian.

‘The reality is that it is very, very unlikely for a woman to naturally become pregnant at 50. And, what’s more, it is equally unlikely that she can do so using IVF.’

The figures improve dramatically if a woman decides to use donor eggs from a younger woman, however Naomi’s comment that the baby is ‘her child’ appears to suggest this wasn’t the case.

A woman in her 40s ‘might reasonably hope for a 30 per cent likelihood of success or greater’, according to Rachel.

There is also the possibility that Naomi used her own eggs which she froze when she was younger. This increases the likelihood of successful IVF insemination.

Rachel explains: ‘Because our eggs deteriorate in quality as we age, it is wise to freeze our eggs when we are in our 20s or early 30s. After that, our chances of success start to drop off.

‘In order to make sure there are eggs to “harvest” women take medications to stimulate them to produce plenty of eggs.

‘These are then taken from the ovaries under sedation using a needle guided through the vagina into the ovary to take up to 15 eggs at a time. These eggs are then quickly frozen and kept until needed.’

In both instances, a woman can use donor sperm, either from a clinic or from someone known to the mother. 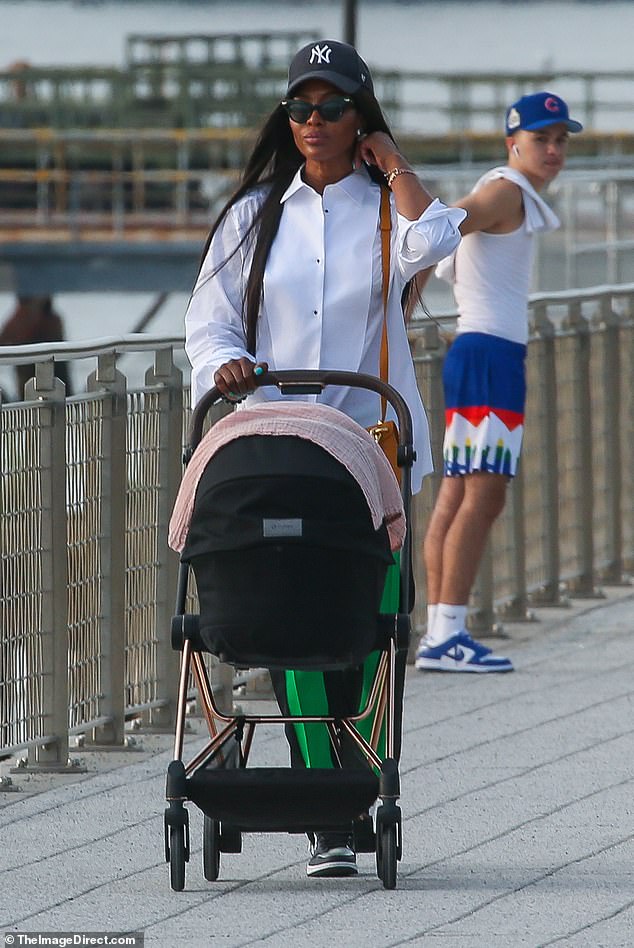 JULY 2021: Naomi looked to be taking to motherhood swimmingly as she strutted through the streets with her pram in tow while looking chic

There has been widespread speculation that Naomi used a surrogate, a method which is becoming increasingly common.

WHAT ARE THE LAWS ON SURROGACY?

The laws of surogacy differ from country to country.

In the US the laws suffer from state to state; some states have written legislation while others have common laws stemming from court decisions.

For example, California is accepting of surrogacy agreements and upholds agreements that include LGBT people.

However, others are stricter, like Michigan, which forbids absolutely all surrogacy agreements, and fines people $500,000 for entering into agreements.

In the UK surrogates are the legal mother of any child they carry, unless they sign a parental order transferring their rights to the intended parents when they give birth.

The birth mother always has the right to keep her child, even if they are not genetically related.

It’s illegal to pay a surrogate in the UK, except for medical expenses.

Over the last 20 years in the UK, the number of parents choosing surrogacy has quadrupled, with 413 cases registered in 2021 compared to just 117 in 2011.

It has celebrity fans including Priyanka Chopra and Nick Jones, Cameron Diaz and Benji Madden, and Kim Kardashian and Kanye West.

Midwife Pip Davies, known on Instagram as Midwife_Pip, explains: ‘There are 2 types of surrogacy processes in the UK.

With host surrogacy, embryos made using the egg and sperm from the parents are transferred via IVF into the surrogate.

In the case of a single parent, a donor egg or sperm can be used.

With this approach, the surrogate is not genetically connected the the child conceived.

In Naomi’s case, this could mean her egg and a donor sperm were used to create an embryo that was then transferred to a surrogate.

Straight surrogacy uses the surrogate’s own eggs to conceive.

Once again, Naomi’s comment would hint at the fact that she used her own eggs.

Pip continued: ‘There are surrogacy organisations in the UK that work with surrogates and intended parents to support them through the process, assist with finding matches and ensure important checks are carried out.

‘Although surrogacy is legal in the UK, surrogacy arrangements are not enforceable by law.

‘This is where working with a dedicated organisation to guide you is a sensible approach to take.’

Naomi’s maternal nature: What the supermodel has previously said about motherhood 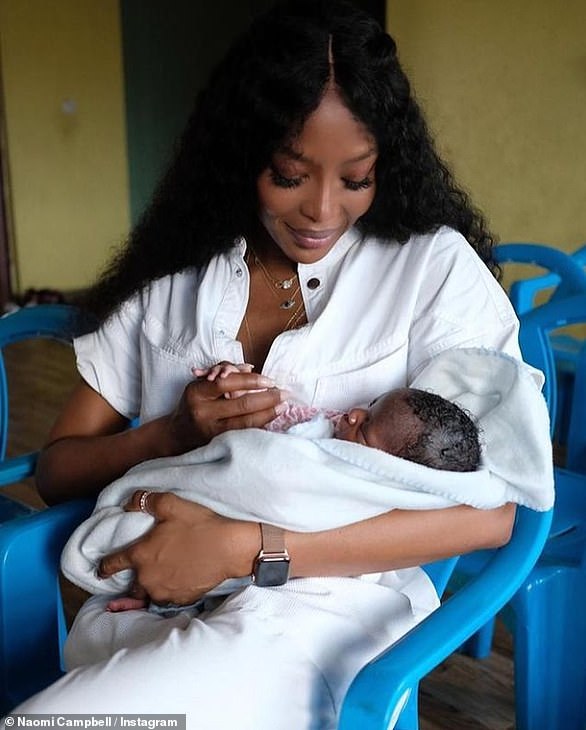 Mix up: In 2019 Naomi denied claims she had adopted a child after fans got the wrong end of the stick when she posted a picture cradling a newborn baby on Instagram on Mother’s Day

Miss Campbell has undertaken charitable work in orphanages for more than a decade and was very keen to have children with her long-term boyfriend, Russian businessman Vladislav Doronin, whom she dated from 2008 to 2013, but Doronin was married.

A friend told the Daily Mail: ‘She was devastated not to have a baby with Doronin and he was her great love, but he didn’t want to commit, so in a way this is no surprise.

‘She has talked a lot about having children, and feeling very maternal, but did say that it just was not going to happen for her.’

Recently she dated rapper Skepta and had a fling with former One Direction star Liam Payne in 2019.

In 2017 she told ES magazine: ‘I think about having children all the time. But now with the way science is I think I can do it when I want.’

Asked if she would have the child herself rather than adopt, she replied, ‘Maybe’, but she went on to add: ‘I do want a father figure. I think it’s important.’

‘When I’m around children, I become a child myself. That’s the little girl I don’t ever want to lose.’

The model has kept her daughter out of the spotlight and only offered a partial glimpse of the baby’s face in the British Vogue shoot.

She has also been spotted taking her daughter for strolls in New York.