The Queen had to step in to resolve a row after Prince Andrew took a bathroom that was reserved for Prince Charles, a former maid has claimed.

Janette McGowan, a former Buckingham Palace maid, claimed the Duke of York refused to remove his toiletries from a bathroom at Sandringham intended for his older brother.

She said the row, which took place at Christmas in 1999, was only resolved when the Queen intervened and spoke to Andrew, who was 39 at the time.

Ms McGowan, who was a housemaid from 1999 to 2000, claimed household staff were alerted to an ‘ongoing situation’ after the Queen’s second son took a bathroom reserved for Charles, then 51.

She told The Sun: ‘We were told not to move anything and not to touch anything in that bathroom because there was an ‘ongoing situation’.’

Janette McGowan, a former Buckingham Palace maid, said Prince Andrew refused to remove his toiletries from a bathroom at Sandringham intended for Prince Charles (both pictured)

Ms McGowan, who had travelled to Sandringham with the family, said members of the Royal Family are allocated rooms and a bathroom at the Norfolk estate, but Andrew had taken a bathroom meant for Charles.

She said the ‘bizarre stand-off’ was only ‘defused’ when the Queen ‘had words’ with Andrew and tell him to use another bathroom.

Ms McGowan insisted there was ‘nothing special’ about the bathroom, saying it was a ‘good old sibling row’.

She added: ‘Charles was very grown-up about it, which is more than you can say for Andrew.’

When Ms McGowan worked at Buckingham Palace, Andrew was living permanently at the London residence, with the former maid describing him as ‘spoilt’.

Ms McGowan, who went on to work for Princess Michael of Kent and the Earl and Countess of Wessex, said of the squabble: ‘I think it was very petulant. He’s [Andrew] very spoiled with regards to his own rights.’ 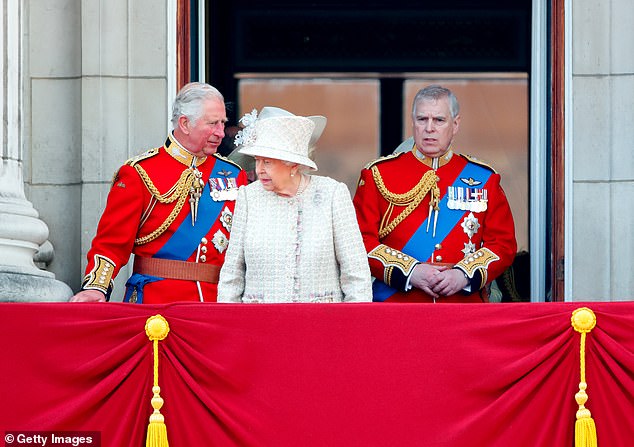 Ms McGowan said the row, which took place at Christmas in 1999, was only resolved when the Queen intervened and spoke to Andrew (both pictured with Charles), who was 39 at the time 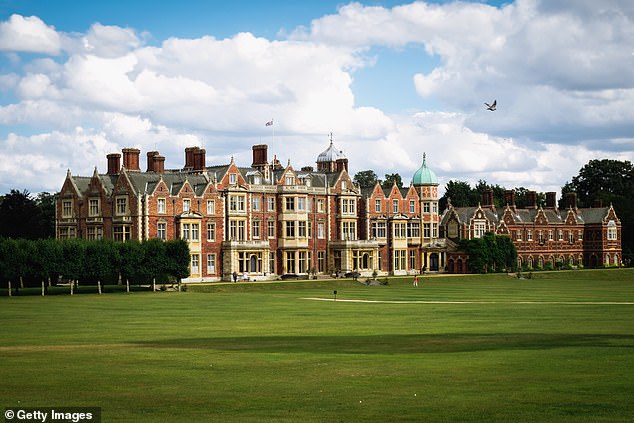 Ms McGowan said members of the Royal Family are allocated rooms and a bathroom at Sandringham (pictured), but that Andrew had taken a bathroom meant for Charles

Meanwhile, another former maid at Buckingham Palace has spoken out about working for Andrew, calling the Duke of York ‘demanding and entitled’.

Charlotte Briggs claimed on Thursday that she was ‘left in tears’ by Andrew’s foul-mouth rants, and on one occasion faced his wrath over a tiny gap in his curtains.

Speaking to The Sun, Ms Briggs said the prince yelled at her: ‘Can’t you f***ing do anything right?’ as she ran up and down the stairs to fix the curtains, some of which he was sitting a matter of yards away from.

‘This man fought for his country in the Falklands but couldn’t stand up to close his own curtains,’ the 47-year-old mother of two told the newspaper.

‘It was utterly ridiculous but spoke volumes about him,’ she added.

By comparison, Ms Briggs said that the Duke’s brothers Charles and Edward, as well as other royals she encountered during her time at the palace, were ‘wonderful’.

She began working at Buckingham Palace in 1996 when she was 21, but within six months was tasked with being Andrew’s maid; a job that ‘nobody wanted,’ she said.

She was paid £600 a month and in 1996, she was even pictured on the royal balcony ahead of the Trooping the Colour ceremony, according to The Sun.

At the time, Andrew was 36 and had recently divorced from Sarah Ferguson. He would frequently fly off the handle and expected everything to be done for him.

Ms Briggs, from Halifax, broke her silence to The Sun after Prince Andrew was stripped of his military titles amid a sex assault lawsuit brought by Virginia Giuffre in the United States. 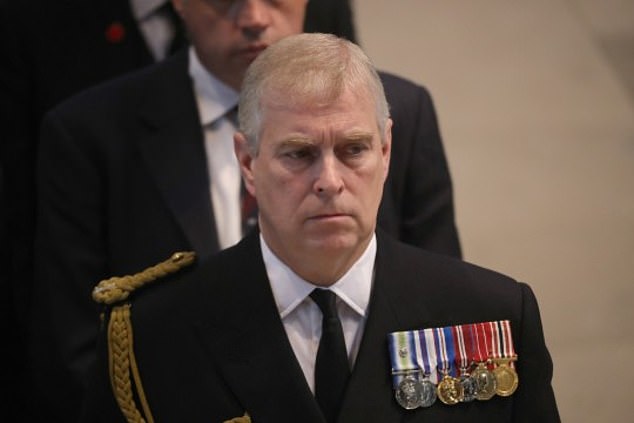 Meanwhile, another former maid at Buckingham Palace has spoken out about working for Andrew, calling the Duke of York (pictured) ‘demanding and entitled’

Ms Giuffre claims she was trafficked by convicted paedophile Jeffrey Epstein and Ghislaine Maxwell to have sex with the prince three times when she was a teenager. The Duke of York vehemently denies the allegations.

The Queen stripped Andrew of his royal titles, and as he is facing calls to be evicted from the Royal Lodge in Windsor where he currently lives with his ex-wife Ferguson.

He must now fight claims of rape and sexual assault in the US courts as a private citizen.

Meanwhile, it was revealed that Andrew could lose his round-the-clock police protection as early as next month after he was exiled as a frontline royal.

Sources said a full review of his security is being carried out by the Metropolitan Police and the Home Office.

Andrew, who remains ninth in line to the throne, has so far been allowed to keep his taxpayer-funded police bodyguards at a cost to the public purse of an estimated £2-3million a year.

This has sparked intense public debate, particularly because his nephew, Prince Harry, was stripped of his police protection when he quit as a working royal in 2020 and moved to the United States.

‘Although no-one will comment on it publicly, this is an issue that is now actively being discussed by the Met’s Royal and VIP Executive Committee,’ a source told the Daily Mail.

‘The situation [as regards Harry] is awkward and may prompt a decision sooner rather than later. If Harry, who is no longer a working royal, does not get security in the UK, then why should Andrew?’

Andrew, who lives in 30-room Royal Lodge on the Queen’s Windsor estate, will always benefit from the round-the-clock protection that comes with living in proximity to a royal residence.

But it is the security that accompanies him away from the estate that will be under discussion.

His children, Princess Beatrice and Princess Eugenie, had their official royal security taken away several years ago following public outrage at their globe-trotting antics, which saw officers regularly follow them on trips abroad.

His ex-wife Sarah, Duchess of York, who still lives with him, has not officially had any taxpayer-funded security since they divorced in 1996.

Other royals including Princess Anne and Prince Edward have had their security scaled back, while royal grandchildren including Zara Tindall and Peter Phillips have never had it as adults.

Neither the Metropolitan Police nor the Home Office would comment last night, nor would a representative for Andrew.

Dai Davies, a former head of royal security at Scotland Yard, said of Andrew possibly losing his bodyguards: ‘It is a big step, although the likely risk is small, and there would be strong arguments to be made that he does not require “PPO” [personal protection officer] status if he is no longer a working royal.’

Scotland hotel review: Inside the Kimpton Charlotte Square in Edinburgh