Harrowing photos have shown the devastation caused by the tsunami in Tonga as villages are destroyed and houses are left resembling piles of rubble.

The South Pacific archipelago was rocked by the eruption of the Hunga Tonga-Hunga Ha’apai underwater volcano on Saturday, which resulted in a tsunami striking minutes later.

The death toll from the disaster has climbed to three with every house on Mango Island completely destroyed.

Images show locals in the Kanokupolu village on the island of Tongatapu staring at the remains of their homes, many of which had been crushed by trees, while cars were seen buried under piles of branches. 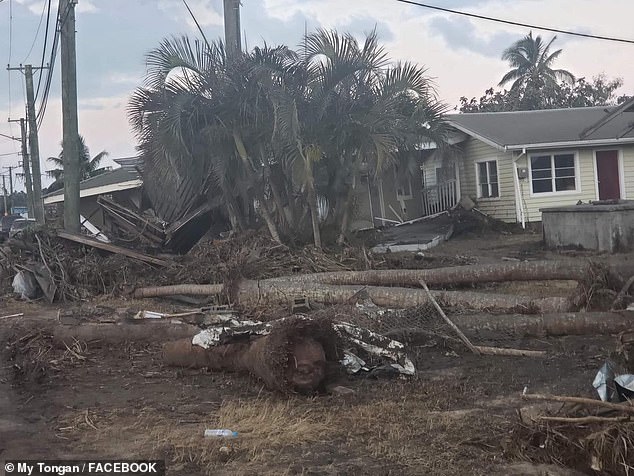 Tonga was rocked by an underwater volcano on Saturday, which resulted in a tsunami wreaking havoc on the islands minutes later 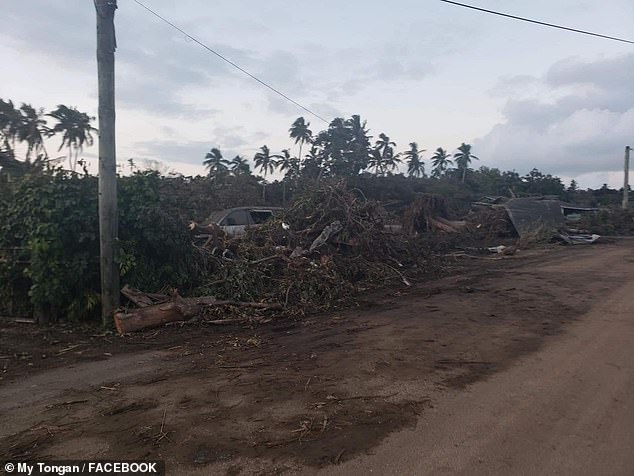 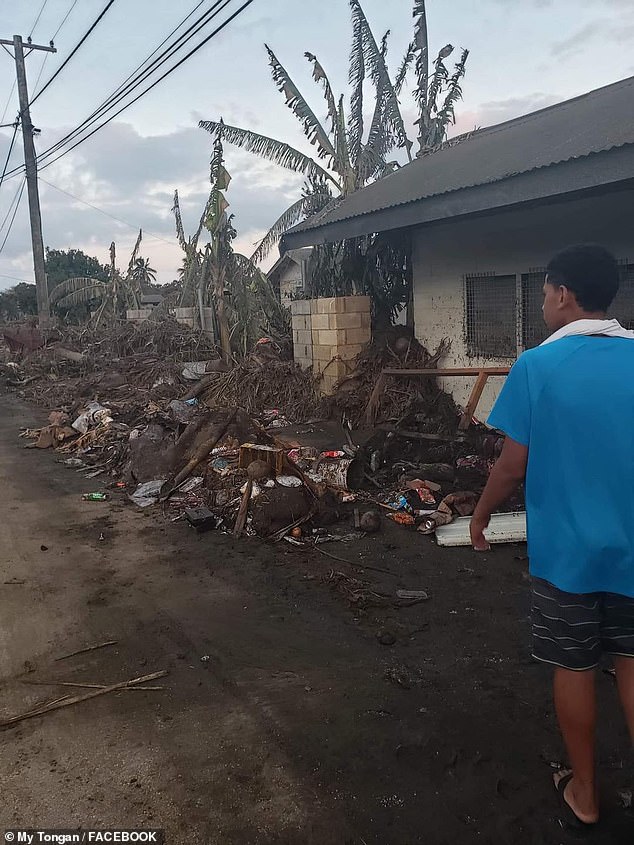 Images show locals in Kanokupolu village on the island of Tongatapu staring at the remains of their homes, many of which were crushed by trees

Researchers from NASA have estimated the blast was ’10 megatons of TNT equivalent’, which is 500 times more powerful than the nuclear bomb dropped on Hiroshima in 1945.

James Garvin, the chief scientist at NASA’s Goddard Space Flight Center, told NPR although the blast was significant, it was likely there wouldn’t be another eruption of that size in a long time.

‘If the past precedent for volcanic eruptions in this kind of setting has any meaning at all then we won’t have another one of these explosions for a while,’ he said.

The eruption was heard in Alaska, located 9,744km away.

Michael Poland, a geophysicist with the U.S. Geological Survey said the event was possibly one of the loudest recorded on the planet in over a century.

‘This might be the loudest eruption since [the Indonesian volcano] Krakatau in 1883,’ he told the publication.

The South Pacific islands lie over a subduction zone otherwise known as a collision of two of the earth’s tectonic plates, where one slips under the other.

He believes the eruption was sparked due to a change to the underwater system, which led to sea water flooding into the chambers.

Incredible footage captured the sound of the explosion as terrified locals fled the beach.

In the video taken 40 miles away from the underwater volcano, a huge plume of ash is shown rising over the horizon, filling the sky before a deafening boom is heard.

The person filming and other onlookers are seen visibly shaken as the shockwave hits, and immediately turn away from the ocean and begin running in-land. 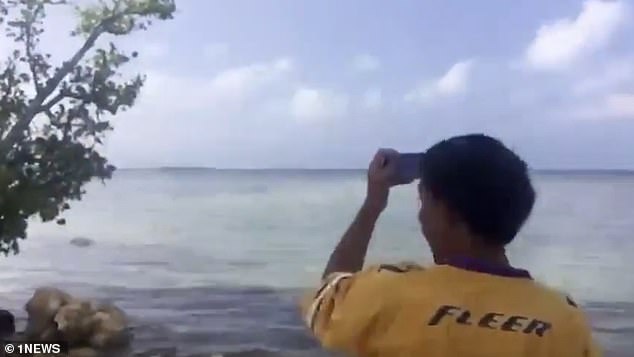 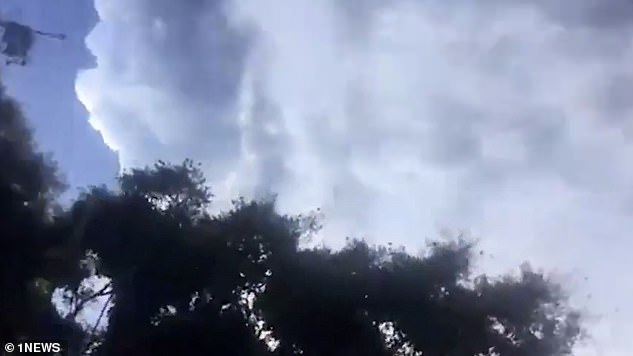 The footage spanned across the sky showing the huge plume of ash and steam rising from the volcano, moments before the shockwave hit Tonga

One person, who looks like a young boy, instantly turns away from the water and starts running. After a couple of seconds, the others do the same, presumably after realising the danger they are in.

As they run away, the people can be heard panicking and swearing. The person filming appears to run inside a building and is heard speaking to a woman, before the footage cuts off.

The government on Tuesday confirmed three have so far died from the disaster but the true extent of the eruption is not yet known. 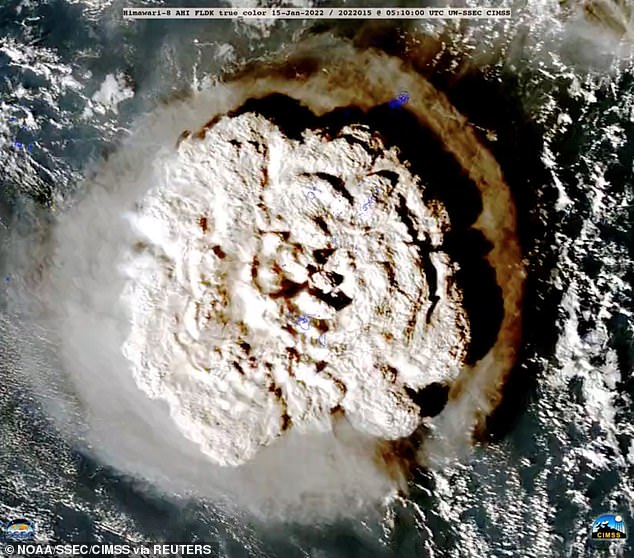 Pictured: A plume rises over Tonga after the underwater volcano Hunga Tonga-Hunga Ha’apai erupted in this satellite image taken by Himawari-8, a Japanese weather satellite operated by Japan Meteorological Agency on January 15, 2022

The eruption at the underwater volcano Hunga Tonga-Hunga Ha’apai off Tonga, January 14, 2022 is seen in a video gran showing the huge plume of ash and steam rising from the ocean

The dead include a 65-year-old woman on Mango Island, a 49-year-old man on Nomuka Island, and 50-year-old Briton Angela Glover who was found dead on Tongatapu Island on Monday.

An entire village on Mango Island has been swept away by the tsunami, the government also confirmed, with just two buildings left standing on Fonoifua Island. Namuka Island also has ‘extensive damage’.

Rescue operations including evacuations of Mango, Fonoifua and Atata islands are underway, with ‘a number of’ injuries also reported – though government officials could not say how many.

Communications from Tonga, a remote set of Pacific islands with a population of 105,000, have been sparse since disaster struck late Saturday.

The eruption not only sparked a tsunami, but covered nearby islands in ash, and severed an undersea internet cable connecting the country with the outside world.

While early reports from the islands were encouraging, as the days have gone on the picture has darkened. Aid workers on the main island of Tongatapu say the death toll there is likely to be limited, but fears are growing for hundreds of people who live on smaller outlying islands and have not been heard from since the eruption.

Reconnaissance planes from the Australian and New Zealand air forces circled some of the islands on Monday, giving a glimpse of the conditions being faced by survivors – moon-like landscapes covered in thick ash, buildings flattened, and people living under tarpaulins.

Aid efforts are being hampered by damage to the islands’ main port and airport, but also by the country’s strict zero-Covid policy which could see aid shipments and workers quarantined to stop a ‘tsunami of Covid’.

Tonga has recorded just one official Covid case in a traveller from New Zealand who tested positive in isolation in October last year, and is determined to keep it that way.

Ministers have already warned their counterparts in New Zealand and Australia, which are coordinating aid efforts, that virus protocols will be applied to rescuers. 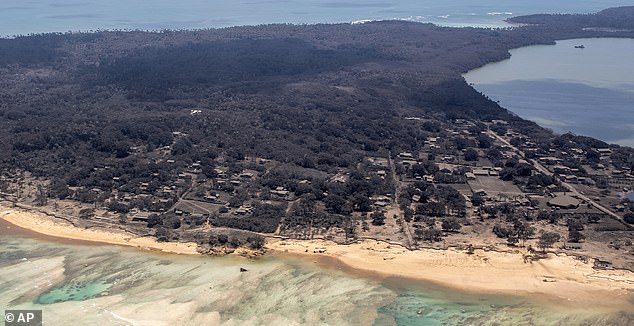 New Zealand and Australian air force planes have circled Tonga, as the true scale of devastation caused to the islands slowly emerges. Pictured above is one of the smaller islands, which appears grey because it is blanketed in ash 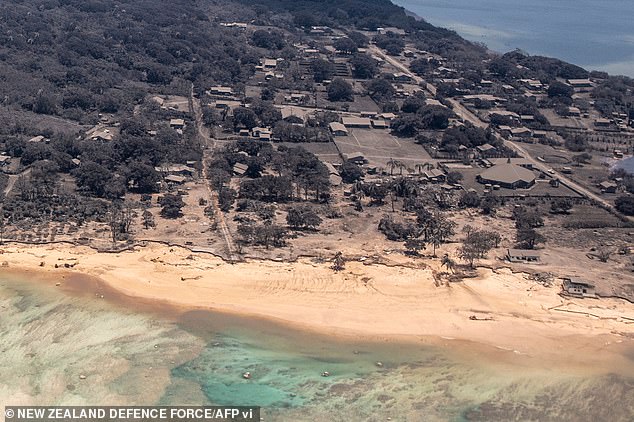 An image taken from a military reconnaissance plane shows a Tongan village inundated with ash, while the beach shows signs of water damage where tsunami waves washed ashore following a huge volcanic eruption at the weekend 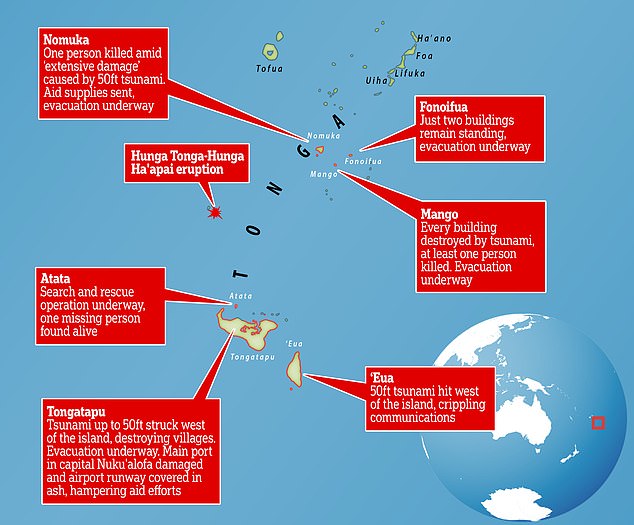 Tonga has given its first update on rescue efforts since the eruption and tsunami hit, revealing which islands are worst-affected and where evacuations are currently taking place 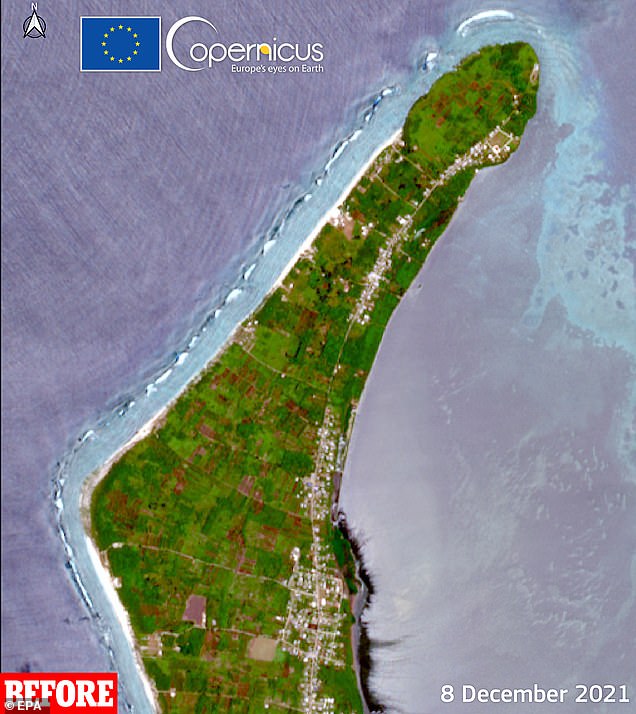 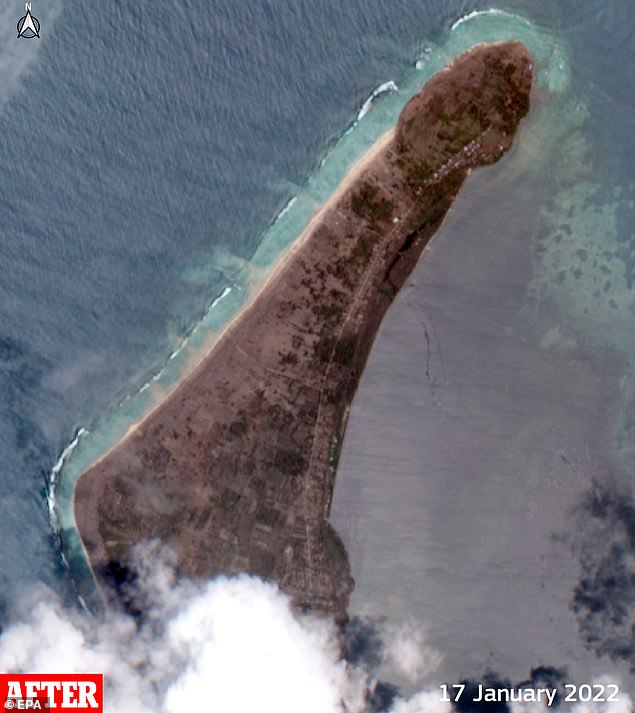 Satellite images reveal how Kanokupolu, a village on the hard-hit western side of Tonga’s main island of Tongatapu, has been almost wiped out as ash turns the landscape grey 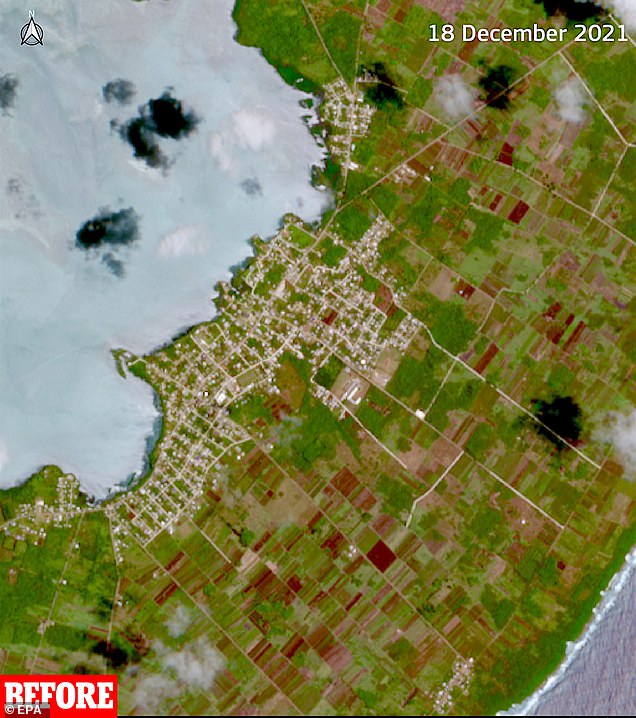 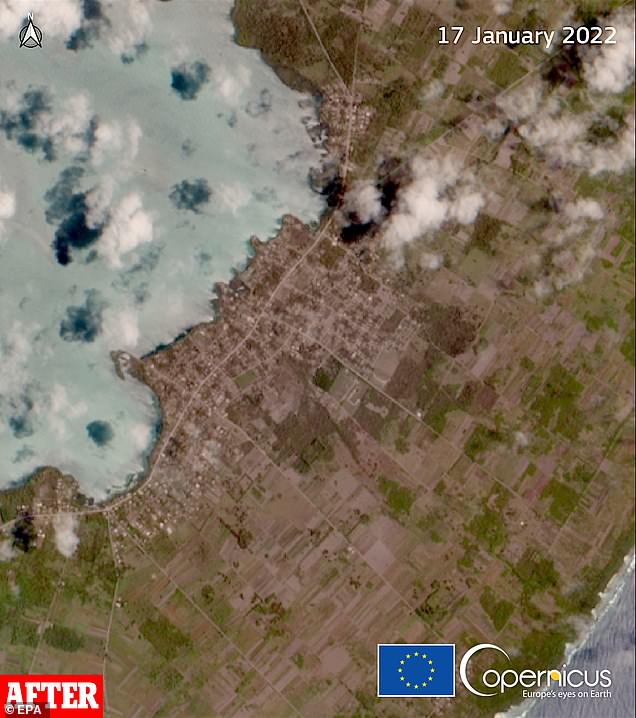 Satellite images taken before and after the eruption reveal how a village on one of Tonga’s islands has been badly damaged, with the surrounding landscape blanketed in ash 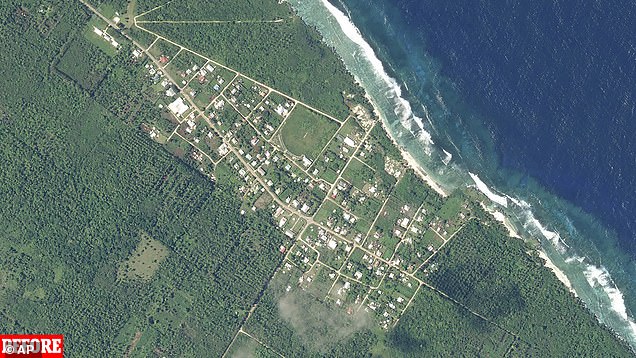 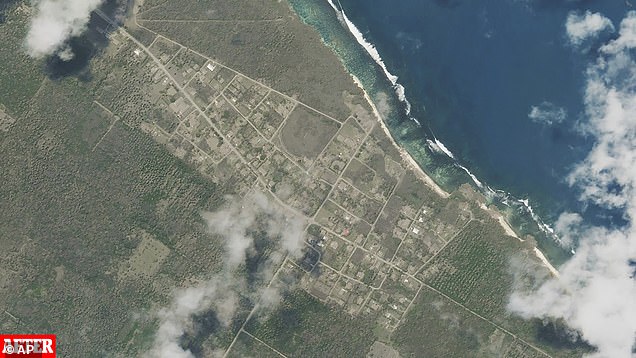 Satellite images of Niutoua, a village on Tonga’s main island of Tongatapu, show how it has been completely destroyed with all buildings washed away during a tsunami triggered by the eruption 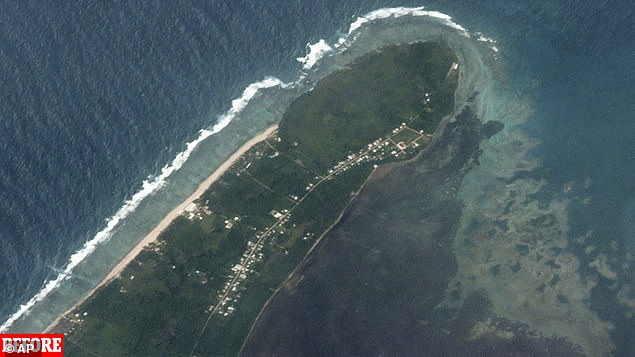 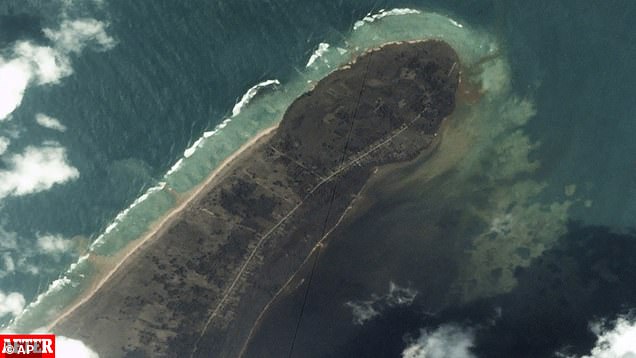 Satellite images reveal how the village of Kanokupolu, on the main island of Tongatapu, was completely washed away in a tsunami which struck after a volcanic eruption late Saturday 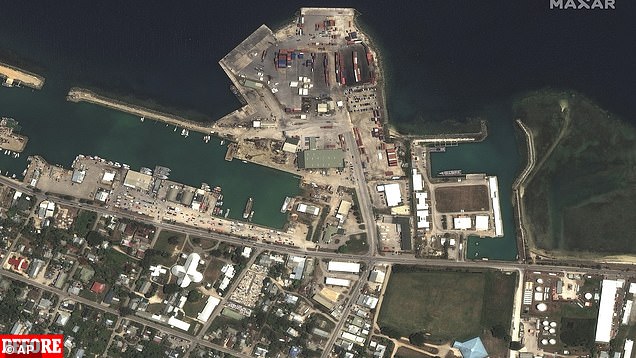 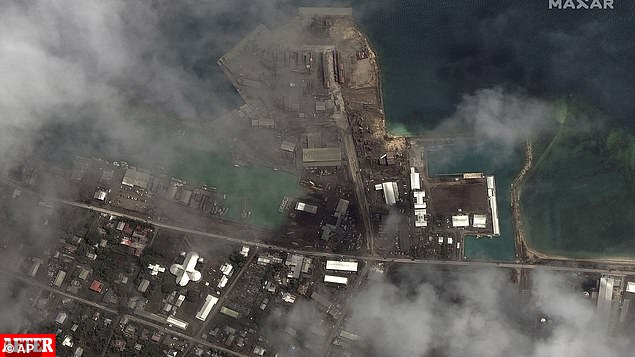 Satellite images reveal damage caused by the eruption and tsunami at Tonga’s main port in the capital Nuku’alofa, which is now blanketed in ash with many buildings damaged or destroyed

On the western coast of the main island, 56 houses were completely or seriously damaged and residents moved to evacuation centres.

Mango is about 43 miles from the Hunga Tonga volcano, which sent tsunami waves across the Pacific Ocean when it erupted with a blast heard 1,430 miles away in New Zealand.

A search and rescue operation began on Sunday for Atata island, which has a population of about 100 people.

‘Challenges to sea and air transportation remain due to damage sustained by the wharves and the ash that is covering the runways,’ it said. Some limited communications had been made with satellite phones, but other areas remain cut off.

The Tongan navy had deployed with health teams and water, food and tents to the Ha’apai islands, with more aid sent on Tuesday due to the severity of the damage observed on Mango, which has about 50 people, and Fonoifua and Namuka islands, it said. 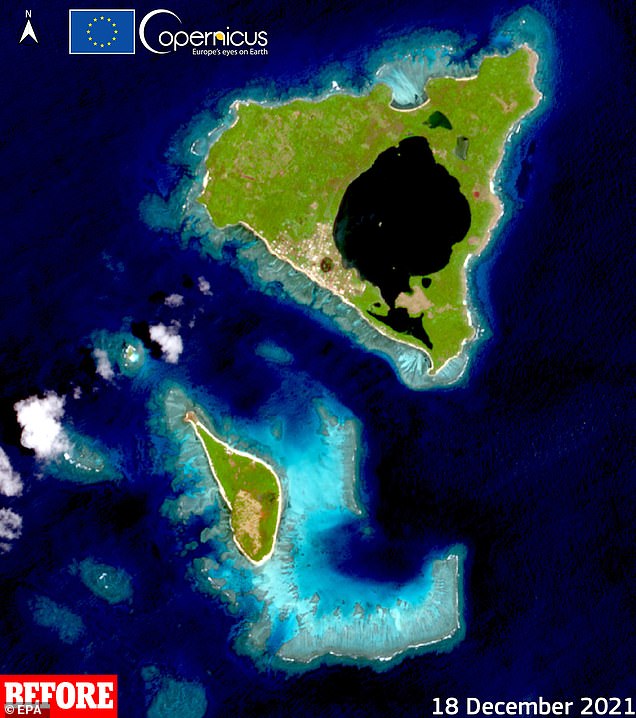 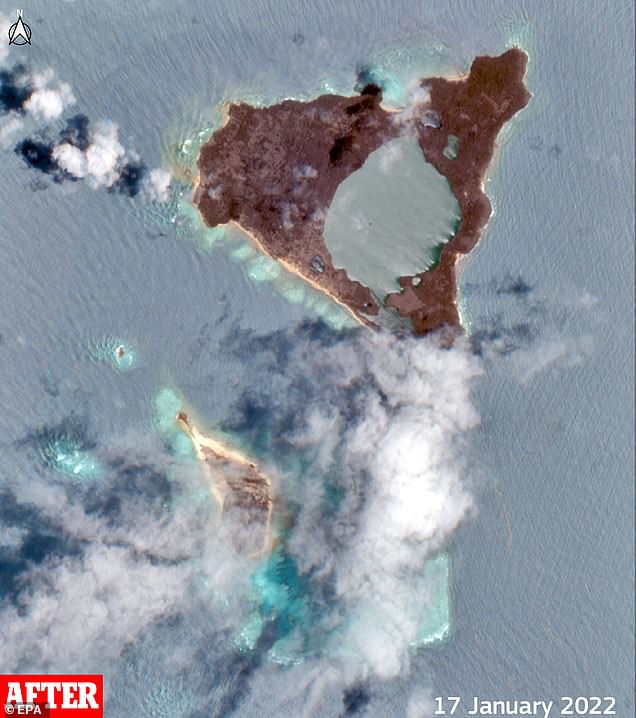 Nomuka Island, Tonga, is seen before and after the eruption which caused widespread damage to villages and blanketed the island in ash, turning it a dark grey colour 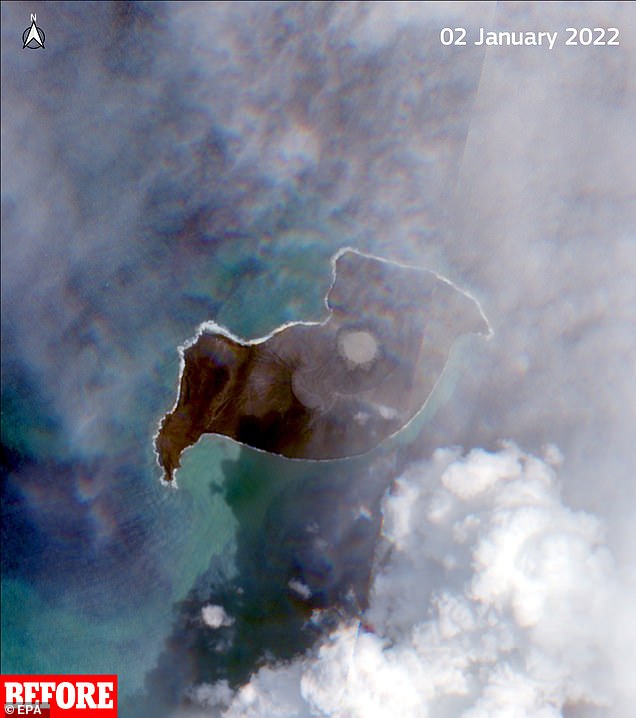 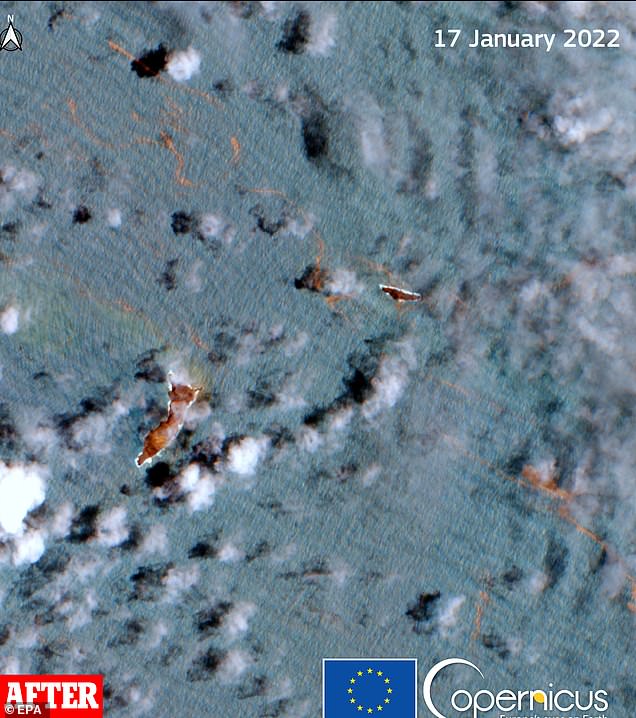 The peak of the Hunga-Tonga volcano is seen before and after the eruption, which destroyed most of the cone

Australia’s Minister for the Pacific Zed Seselja said Tongan officials were hoping to evacuate people from the isolated, low-lying Ha’apai islands group and other outer islands where conditions were ‘very tough, we understand, with many houses being destroyed in the tsunami.’

The United Nations had earlier reported a distress signal was detected in Ha’apai, where Mango is located. The Tongan navy reported the area was hit by waves estimated to be 5-10 metres (15-30 feet) high, said the U.N. Office for the Coordination of Humanitarian Affairs (OCHA).

The NZDF images, which were posted unofficially on a Facebook site and confirmed by Tu’ihalangingie, also showed tarpaulins being used as shelter on Mango island.

A thick layer of ash blankets the islands, the New Zealand High Commission said, adding it was working to establish communications with smaller islands ‘as a matter of priority’.

The U.N. humanitarian office said Tongan officials had said that clearing the runway would take days as it was being done manually, by Wednesday at the earliest.

People on the western coast of the main island of Tongatapu had been evacuated because of ‘significant damage’, OCHA added in an update, while government ministers had broadcast warnings on radio against price gouging amid worries of supply shortages.

The Tongan government is expected to formally request aid from countries including Australia and New Zealand tomorrow. Both antipodean nations have C-130 military aircraft on standby, packed with emergency supplies.

‘The priority now will to be get supplies to Tonga and the biggest constraint on that at the moment … is the airport. There is still a significant amount of ash,’ Seselja said.

The archipelago has remained largely cut off from the world since the eruption which cut its main undersea communications cable.